We at FGC/SEISA Group are very honored to receive the Letter of Appreciation from the Eritrean National Athletics Federations.  The background of it is that the support made by FGC/SEISA Group so far is now bringing fruit visually.

Eritrea won two Silver medals at the IAAF World U20 Championships held in Poland from July 19 trough 24.  In addition, one ranked 5th position, while two ranked 7th position.  Especially, Mogos Shumay and Awet Habte ranking 7th position were given a chance by FGC/SEISA Group to take part in the intensive training camp jointly organized by JAAF/Athletic Clubs or to attend a competition race in Japan.  Those experiences surely helped them to further develop their talents and contributed to the great success of this time.  They are all young talents expected to be further trained toward the 2020 Tokyo Olympic Games.  In this regards, what FGC/SEISA Group have done so far is highly evaluated, which has led to the Letter of Appreciation. 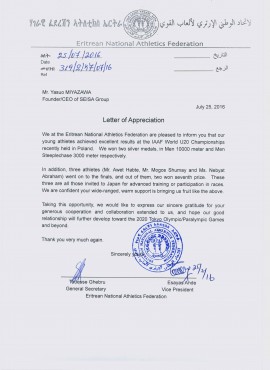