Mr. Miyazawa/Senior Managing Director revisited Eritrea for 10 days starting on Thursday, October 15, 2016, accompanied by H.E. Ambassador Maruyama/ Director-General of African Affairs Department of Japan’s Ministry of Foreign Affairs. They jointly made a courtesy visit to H.E. Isaias/President, H.E. Osman/Minister of Foreign Affairs, H.E. Giorgis/Minister of National Development and other VIP statesmen. H.E. Ambassador Estifanos came back from Tokyo shortly to attend these visits/meetings. It showed how much Eritrea expected from Japan and FGC/SEISA Group.

Our Eritrean Project started in September 2014. In the meanwhile, Mr. Miyazawa visited the country already two times, while we received the delegation to Japan from Eritrea already three times. Therefore, this time’s visit went in a smooth and practical way.

The Eritrean National Olympic Committee provided us with a status report concerning preparations of the training gym center and the Rio de Janeiro Olympic Games. It was stated that female sports were not yet active as a critical issue and needed to be further encouraged. So it was agreed upon the issue would be discussed further. At the Paraolympic Committee, we were introduced to a new rehabilitation/training gym room. During the meeting with them, it was agreed upon to decide the events Eritrea would take part in at the Tokyo Paralympic Games and a training plan for them as soon as possible. At the meeting with the Eritrean National Athletic Federation it was stated that the selection of young athlete students (15-16 years old) to be delegated to Japan was in progress and senior athletes would be delegated to JAAF’s training camp. We also had a meeting with the Eritrean National Cycling Federation stating further nurturing programs were required for female cyclists, although male players were reaching international standards.

During the stay, we had an opportunity to meet Dr. Haile/Dean of Orotta School of Medicine, exchanging views and opinions about current situation and future plans. As a follow-up, it was agreed upon a few specialists would be invited to Japan, so that they could discuss with Japanese specialists directly to have supports from Japan. We were also able to visit the Ministry for Transportation and Communication for the first time, and agreed upon to continue discussions for training of young communication-related engineers.

As explained in the above, the visit of this time was very successful. All the meetings/visits were fruitful. We are confident it will contribute to further strengthening the relationship between both countries and will also accelerate our project. 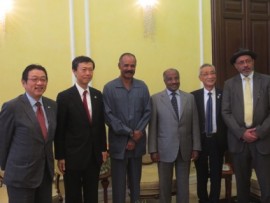 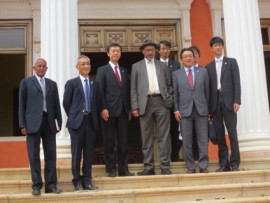 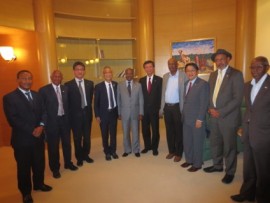 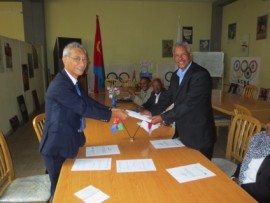