Ghirmay Ghebreselassie won the first gold medal in this game and at the same time he was the first gold medalist ever for Eritrea in world athletic competitions like Olympic Games and IAAF World Championships. As Mr. Miyazawa acted as a spokesman, he received interviews from the press. The Eritrean National Teams uniforms were supplied by Mizuno based on a three-party MoU; Eritrea National Olympic Committee, Mizuno, and SEISA Group/FGC. 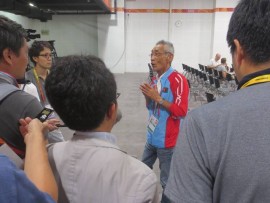