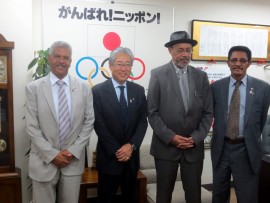 From May 21 ~ 30th, Eritrea National Olympic Committee President Mehari and Eritrean National Athletics Federation Secretary General Tadesse revisited Japan to have further discussion on the 2020 Olympic and Paralympic Games in Tokyo with Japanese parties or organizations involved. Ambassador of Eritrea Estifanos accompanied them for almost all the time.

First, the delegates made a courtesy call on Kanagawa Prefectural Governor Kuroiwa and received an offer for sports camp site in his area. An agreement shall be signed some time in this summer.

Then, the delegates visited Mr. Tsunekazu Takeda, the President of Japanese Olympic Committee (JOC). They agreed upon to sign a cooperative agreement by the time of Rio de Janeiro Olympic and Paralympic Games in 2016. Details will be discussed in the course of time. It was a great success for the delegation because It had been desired from the beginning. 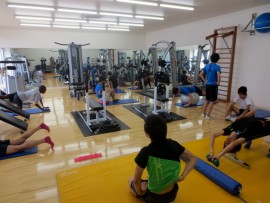 In addition, they had meetings with the Director-General of African Affairs Department in Ministry of Foreign Affairs, Director-General of the Office of the Promotion for the Tokyo 2020 Olympic and Paralympic Games, Japan Association of Athletics Federations, and Athletics Club in Konica Minolta for discussing about cooperative relation toward 2020.

Moreover, the delagates and MIZUNO signed the Memorandum of Understanding regarding the supply of  wears and shoes to Eritrean National Teams. It shall start from the IAAF World Championships in Athletics to be held in Beijing in August, 2015 until the 2020 Olympic and Paralympic Games in Tokyo.